Drone patrol over the East Bay

As the newest addition to the Baykeeper investigation team, Osprey surveyed this heavily industrialized area that includes the Levin coal terminal, Sims metal recycling, and an area contaminated by companies like Bayer, Stauffer Chemicals, and Zeneca (now AstraZeneca). Over a period of nearly 100 years, these corporations contaminated shoreline areas and groundwater with arsenic, mercury, and volatile organic compounds, all of which still exists in the area to this day. This toxic site lies north of a stretch of beautiful tidal wetlands, which Osprey captured in the image below.

The high-quality imagery captured by Osprey has already been used to support our advocacy to defend this region, and will continue to produce invaluable evidence to help us fight for the Bay. A big thanks to our partners at Autonomous Imagery for the drone donation and for the help to expand our investigative capacity in such a significant way! 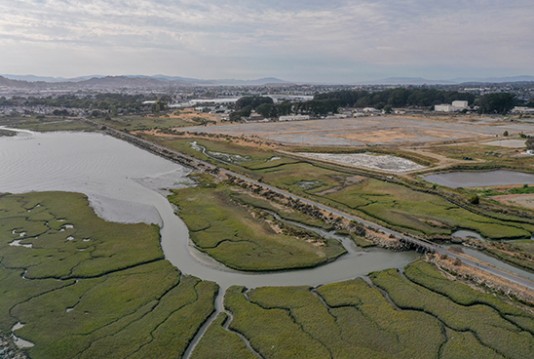 The traditional holiday season of thanks is taking on new flavor as I reflect on what Baykeeper has accomplished over this past year. There’s so much to be grateful for. We made it through the worst...
November 23, 2021

Two weeks ago, an oil pipeline at the Chevron refinery in Richmond leaked, spilling more than 700 gallons of diesel mixture into the Bay. Authorities closed nearby Keller Beach and issued a public...
February 24, 2021

Keeping an Eye on the Bay by Land, Sea, and Air

Cole Burchiel came to Baykeeper after spending time as a park ranger in Vermont; he was hiking the Appalachian trail when he got the call to interview. Now Cole manages Baykeeper’s signature Bay...
December 19, 2020
Join us to hold polluters accountable and defend the Bay DONATE NOW >